Went to do an oils party for a member of my downline.  I was doing the teaching, while she was using my zyto to scan everyone.  People would go one-at-a-time over to the table and get scanned and then rejoin the group.  This group was a LOT of fun!  We usually have mostly women at these events although sometimes a husband will turn up here and there.

As we talked and passed the oils around, we had several, “OH THAT is BAD!!! I don’t like IT at ALL!”…..me:  okay, let’s get the “BLUE BOOK, AKA Releasing Emotional Patterns with Essential Oils“….. some tears when an emotion connected….TONS of laughter…. some “I LOVVVVVVE that one”…. and “yeah, that fits, alright!”

Then there was a late-comer that joined a little bit into the party.  He came with his wife when she got off work.  He was very leery of being there.  You could tell he was VERY uncomfortable and really wanted to leave.  He was eyeing the door and shifting his weight back and forth and had lots of nervous laughter and no eye contact.

He did agree to stay but refused to participate.  He was to my left and the one I handed each of the oils to, to be passed around.  He would not touch them, but would motion for me to hand it to his wife.  He just sat to the side and watched his wife apply the oils and would smell them on her…. for one, two, three, four oils…. then he starts taking the “hand-off” from me and holding the bottle smelling them….five, six oils…

THEN I passed the Stress Away and he’s dumping that one in his hand, saying “Oh…..I LOVVVVE this one”…

and he’s laughing along with us at the stories…..

Some people think StressAway smells like a Margarita due to the lime oil.  I LOVE it myself!  I’ve even heard of some people that love it in their drinking water.  I wouldn’t have thought to try this blend that way. It always makes me release the tension in my neck & shoulders within seconds of opening the bottle. 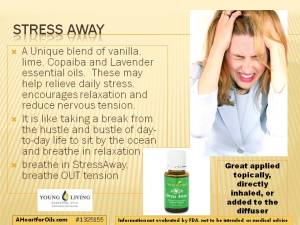 THEN I get to the Peppermint and he asks, “will this help with congestion?”

me:  “well it supports the respiratory system”  he dumps it on and slaps his hands up to his face….

We get to talking about some of the – “ahem” love-inducing oils and he says, “hey, I thought this was going to be an evening….. THIS IS AN ALL-NIGHTER  🙂  (the oils we talked about were Sensation, Amazonian Ylang Ylang and Hong Kuai)

So much laughter and comradery ……

Oils parties, Not just for women…… Best oil party ever….

3 John 2  “Beloved, I pray that in all respects you may PROSPER and be in GOOD HEALTH, just as your SOUL PROSPERS.”